The Nasher Sculpture Center has named Nairy Baghramian the winner of the 2022 Nasher Prize. The Iranian-born German artist is the sixth artist to receive the $100,000 award, and she’s also the second German laureate. (Isa Genzken won the prize in 2019.)

Baghramian’s biomorphic sculptures explore a wide range of ideas about the human body, gender, labor and the interplay between public and private spaces. She humanizes traditional production methods of sculpture like modeling, molding and casting by imbuing these cold, mechanical processes with organic purpose. 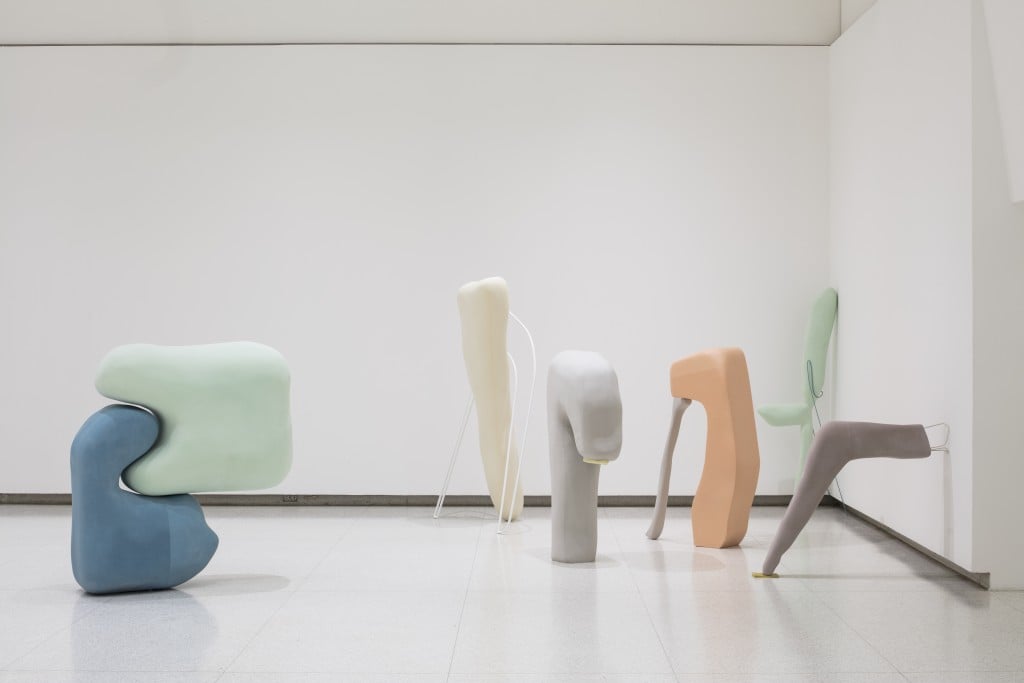 “Sitzengebliebene” (“Stay Downers”) on display at the Walker Art Center in Minneapolis. Photo by Timo Ohler, courtesy of the Nasher Sculpture Center.

“This year, after a prolonged time of separation from people and places during the pandemic, the work of Nairy Baghramian stood out to the jury as exemplary for its consideration of the body, human relationship, and the built environment through sculpture that champions the often-overlooked objects, people, and experiences at play in daily life,” said Nasher Director Jeremy Strick in a statement.

She’ll come to Dallas in April to accept the prize. As in previous years, the Nasher will also present a series of public programs leading up to the award gala to showcase Baghramian’s work and creative ethos.

In the meantime, here’s five things to know about the latest Nasher laureate:

Her work has roots in dance and theater.

Dance, theater and the movement they require have all been part of Baghramian’s creative practice ever since she and her family moved to Berlin from Iran in 1984. She took inspiration from American dancer and choreographer Yvonne Rainer’s understanding of the body and the shapes it makes when it moves and rests. Many of the ideas she’d go on to explore in sculpture like space, gender and sociopolitical issues started in the dance world.

In 2019, Baghramian collaborated with choreographer Maria Hassabi in a dual installation and live performance that took up two floors of a New York City townhouse. Dancers moved around pieces created by Baghramian. Her solo work is also full of organic shapes that seem to move about and engage with the space they inhabit.

She uses a wide range of materials.

Baghramian has created sculptures and installations out of silicone, resin, steel, marble, concrete and much more. Her practice involves considering the history and politics of the materials she chooses, and she often creates installations that are a response not only to their immediate setting but the greater geographic region.

“Maintainers A,” a piece exhibited at the Museum of Modern Art in New York in 2018, uses cast aluminum, colored wax and Styrofoam to tell a story about preservation and destruction. The disparate pieces of the sculpture hold each other up, but they will also wear each other down over time. 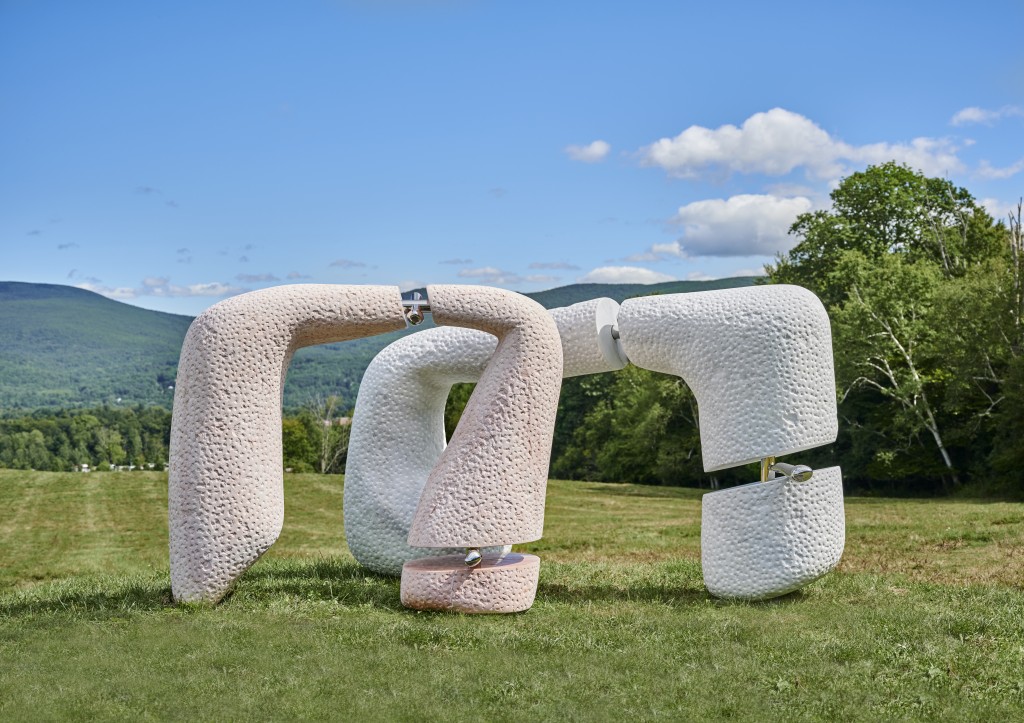 Baghramian’s “Knee and Elbow” on view at the Clark Art Institute in Williamstown, Massachusetts. Photo by Thomas Clark, courtesy of the Nasher Sculpture Center.

One of her more recent works, “Knee and Elbow,” consists of pink and white marble blobs connected with stainless-steel fittings. It juxtaposes the perceived strength of marble and steel with the fragile, joint-like shapes she carved out of the material. She told W Magazine the piece is meant “to highlight the vulnerability of the human form.”

If something about her pieces feels “off,” you’re on the right track.

Part of Baghramian’s practice involves disorienting viewers by creating pieces that can feel incomplete, unsuccessful or even on the brink of collapse. 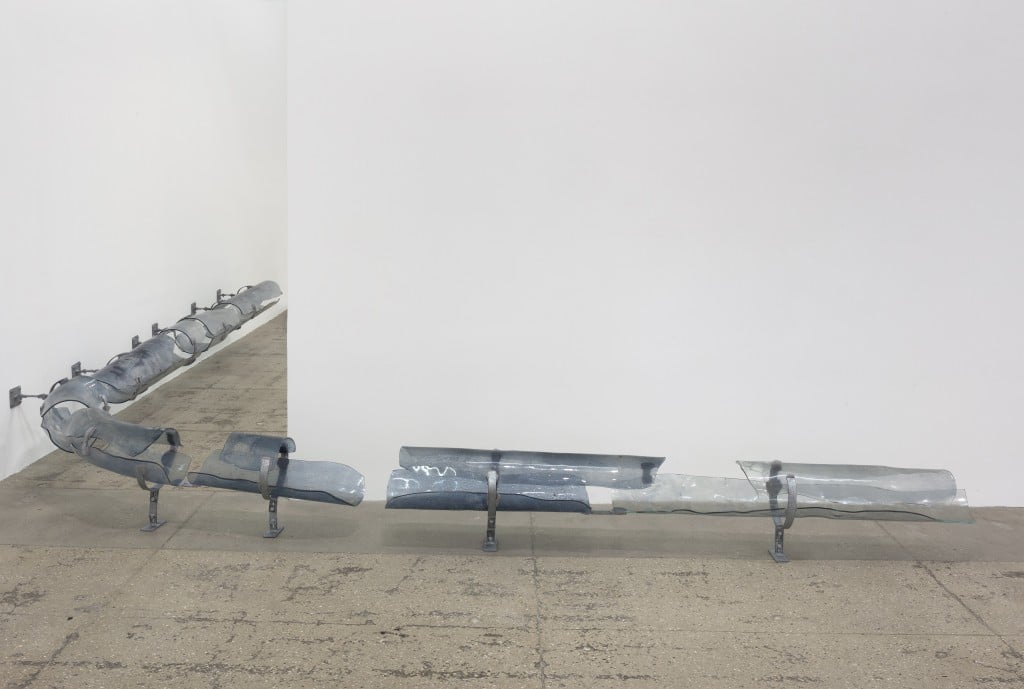 “Dwindler_Low Tide” on view at the Marian Goodman Gallery in New York. Photo courtesy of the Nasher Sculpture Center.

Her solo exhibition “Misfits” at the Marian Goodman Gallery earlier this year was inspired by children’s toys. The brightly-colored, wooden pieces seem like they’d fit together, but upon closer inspection, they don’t. It might make you feel frustrated or uncomfortable, and that’d probably make Baghramian happy.

A lot of her pieces end up in odd places like walkthroughs or the turn of a corner, and they often dangle, lean or spill over like fragile bodies or organs.

She used to work in a women’s shelter.

Before becoming the internationally acclaimed artist she is today, Baghramian worked as a social worker. She worked for a women’s shelter in Germany for nearly 25 years. In an interview with Marian Goodman Gallery, Baghramian said she returned to support the shelter at the beginning of the shutdown in 2020 due to a shortage of workers.

“Going back to the studio to work on my own projects after things at the women’s shelter settled down was a relief,” she told the gallery. “Yet, I remained aware of the fact that there is a bigger world beyond my own studio and city.”

Her work is in collections all over the world. 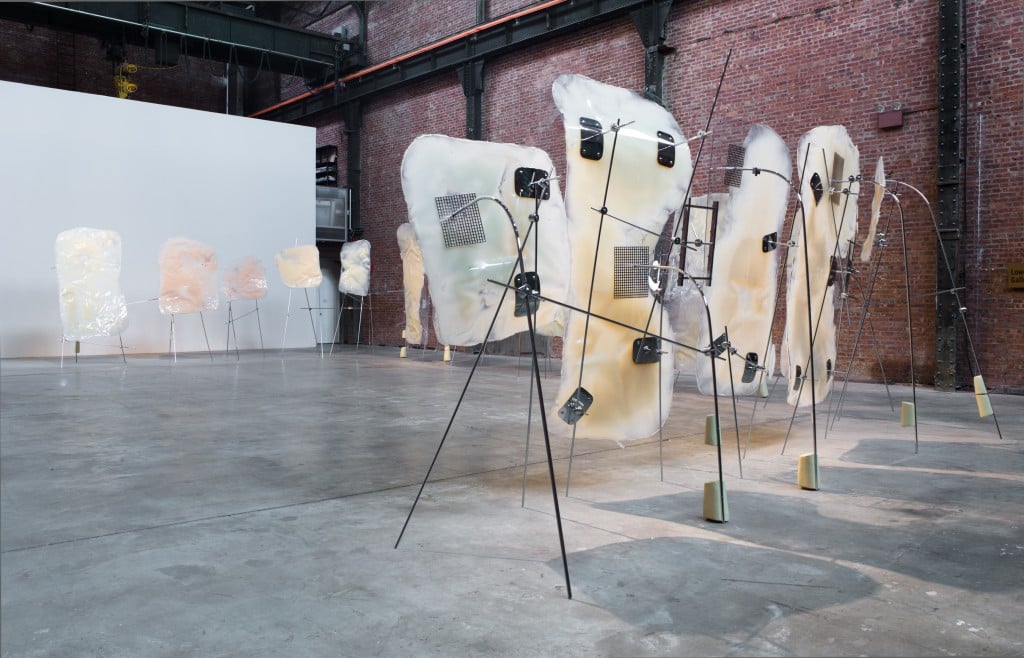 “Retainer” on view at SculptureCenter in New York. Photo courtesy of the Nasher Sculpture Center.

Last year, Baghramian was a nominee for the Guggenheim Museum’s Hugo Boss Prize. She has solo shows coming up in Vienna and Nîmes, France. Her work will also be the subject of a solo exhibition at the Nasher that’s long been in the works.

Art&Seek is made possible through the generosity of our members. If you find this reporting valuable, consider making a tax-deductible gift today. Thank you.

Here’s Your Guide To Fort Worth Gallery Night